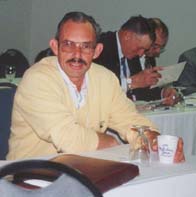 Craig was born in Overton, Yarmouth County. He loved the sea and as a young man, he worked as a steward on the Canadian Coast Guard ship Narwhal. In 1969 Craig joined the Canadian Air Force as a meteorological technician, serving on ships and bases across the country. After retiring from the forces in 1988, Craig returned to live at Cape Forchu. He continued to stay in touch with the sea, working on the ferry Bluenose as a deckhand, and on Beaver Marine tug boats along the eastern seaboard.

It was Craig's interest in the Cape Forchu lighthouse that revealed the depth of his passion for the beacons that guide ships at sea. The Cape Forchu lightstation is a Yarmouth landmark. In 1993 the last lightkeepers departed, leaving the tower locked and the keepers' dwellings empty. As with other lighthouses in Nova Scotia, there was a danger the houses, including a 1912-vintage duplex, and other surplus buildings, would be demolished or sold off by the federal government. Craig, along with his neighbour Gert Sweeney, joined the Friends of the Yarmouth Light Society to help save the lightstation. The group worked tirelessly to restore the site, opening a museum in the former keepers houses. It wasn't glamorous work -- shingling, painting and putting in septic systems, as well as keeping up with regular maintenance in a harsh marine environment. But Craig and the Friends persevered.

After more than five years of fighting the weather and bureaucratic red tape, their work finally paid off. On June 1, 2000, Larry Wilson, the Coast Guard's Maritimes Regional Director, handed the management of the Cape Forchu lighthouse over the municipality of Yarmouth. The transfer meant the future of the lightstation was finally secure. The municipality took complete ownership of the lightstation in 2001. It is now a Municipal Heritage Property.

Craig's passion, tenacity and dedication showed that Nova Scotia lighthouses can be saved. In his honour and as a permanent "Thank you!" the Nova Scotia Lighthouse Preservation Society Awards the "Craig Harding Award," annually at the Annual General Meeting, to a group or individual who has made an outstanding contribution to saving Nova Scotia's lighthouses. The award consists of an engraved pewter plaque specially created by Amos Pewter for the Society.