The Salvages are a group of ledges and rocks, the highest of which is 3m (10 feet) on the West side of the West entrance to Negro Harbour. The origin of the name is not known, but it is found on Admiralty Charts of 1857 and 1870.
On or about April 1915 a diaphone giving 3 blasts every minute was established on the highest rock.

The Salvages Lighthouse was established in 1965. It is shown from a white rectangular building, 16 m (53 ft) high, on the highest rock of the group (43.28 N, 65.23 W). A fog signal of three blasts every minute is sounded from the building; the horn points 116'. A submarine cable is laid from this rock to West Cove, on the south side of Cape Negro Island. 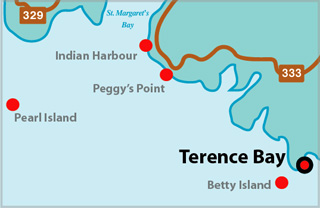 Lightkeepers for The Salvages Lighthouse