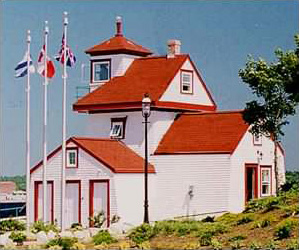 The lighthouse is a timber combination dwelling and tower in an unusual "hunchbacked" shape.

Liverpool, Nova Scotia boasts a uniquely shaped light, one of the oldest in Nova Scotia, commanding a historic site close to the middle of town. Named after the fortified gun battery that protected the town from the 1760s to the 1860s, the point saw several actions in the American Revolution. It was also a signal station and an important public gathering place for the town, becoming park in the late1800s.

Visible from the park is Coffin Island, where the Liverpool area received its first light in 1815 to help mariners along the coast and locate the entrance to Liverpool Bay. By the 1850s, the booming timber trade brought pressure to make Liverpool's harbour easier and safer to enter by day or night. A petition in 1855 from "merchants, shipmasters and other inhabitants of Queens County" persuaded the Nova Scotia legislature to build a harbour light for Liverpool.

While built of wood, its survival on an exposed point for almost a century and a half is testimony to wise construction and the dedicated maintenance of keepers and their families. Most harbour lights follow the same simple pattern, often called "pepper-pot" lights. However Fort Point, dating from an earlier era has a uniquely shaped gable roof described in geometric language by a 1872 sailing guide as "the frustrum of a pyramid on a square base".

In the years that followed, when ships loading timber tied up three deep at Liverpool wharves, the light proved indispensable in making the crowded and busy harbour safe. A review of Nova Scotia lights in 1870 described Fort Point as "of the greatest importance to the trade of the port". It was eventually joined by a network of buoys and markers in the harbour and even a small light on the bridge in the middle of town. 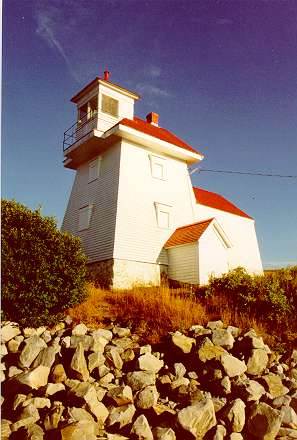 Unlike many island light stations, isolation was not a problem but privacy and security was. As early as 1860 the lighthouse superintendent recommended "A board fence is wanting around the building to prevent it from being defaced and injured as also for the protection of the females who attend the light" (An interesting recognition of women's unpaid light duties!). Keepers at Fort Point also had to make due with very cramped living quarters. When first built the lantern took up the top floor, supplies and lamp oil took up the ground floor, leaving only a small room on the second floor for the keeper to live in. The first keeper soon moved out to live in town. However later keepers moved back into the light and a kitchen was built onto the side of the light at the turn of the century. But during World War Two, quarters became even more cramped as weather forecasters took over the tower room. The last lightkeeper, James McLeod, wrote in 1944, "this room we gave for them (for 1 month only) was not a spare room but the only room we had to use ourselves as living quarters. The results, we (a family of five) have been living in a small kitchen for the past four years."

Designed to help vessels on their "final approach", the Fort Point light had a modest range of 8 miles. Three brass oil lanterns provided the light, magnified by 12 inch round silver-plated reflectors. At first, the lamps burned seal oil but were switched to kerosene by 1864 and burned oil until 1951 when the lighthouse was electrified and automated. The old reflectors were so worn by almost a century of polishing that no silver remained on the copper reflectors and the light shone with a copper hue. They were replaced by 6th order Fresnel cut glass lens.

Fort Point keepers received an extra $36 a year to operate a hand cranked foghorn from 1901 to 1951. Another service until the 1950s was signal station warning vessels of approaching bad weather. Specially shaped drums and cones were hoisted on a signal mast to indicate the weather based on a standard code. The canvas drums were first stored in sheds beside the light and later inside the lighthouse itself.

Photo - This shows the de-commissioned lighthouse before it came into the care of the Municpality of Queens County. 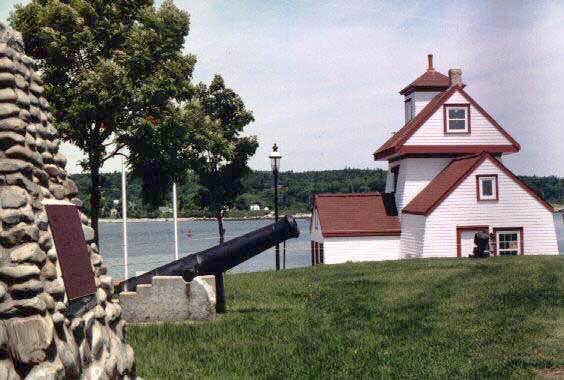 By 1989 modern navigational aids such as radar and depth finders, made smaller harbour lights were less useful and Fort Point was shut down early in 1989. Many historic lighthouses faced swift demolition when closed or automated, however the Fort Point light had long since become a Liverpool landmark. As early as 1946 federal plans to demolish the old light were stopped by concerns from the Town of Liverpool which began to help with maintenance in the 1950s and by 1970 acquired the surrounding land for a park.

Thanks to Liverpool's early interest in lighthouse preservation (at a time when countless lighthouse were demolished) Fort Point lighthouse was acquired by the Province of Nova Scotia, and survives as the fourth oldest remaining light in Nova Scotia (after Sambro, Seal and Havre Boucher).
The Fort Point Lighthouse Museum Interpretive Park opened in September 1997. 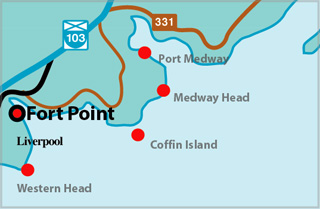 The lighthouse is at the end of Main Street in the town of Liverpool on the South Shore of Nova Scotia. I marks the entrance to the inner harbour. The light has been discontinued.